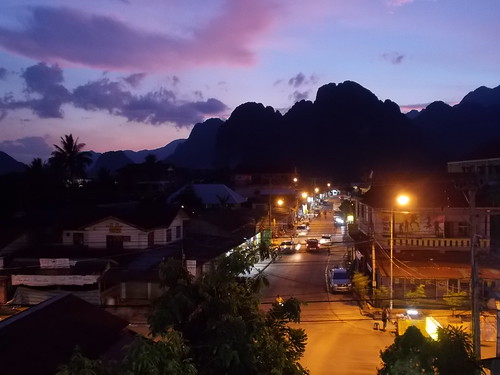 Vang Vieng, the tourist hub of Laos, well known for tubing, and, well, that’s about it really, according to the majority of fresh faced backpackers out there. If you’ve ever been travelling around South East Asia you’re bound to see someone sporting a Tubing vest, or singlet, as the Australians like to call them. They’re the type of people you often overhear in your hostel – normally because they’re speaking so loudly – boasting about how they’ve “done” South East Asia, only to learn later that they’d only just arrived. If “doing” a place means to visit the most popular areas in quick succession and then leave the country I’ll be glad to say that I’ve barely “done” anything.

What I’m trying to tell you is that you should forget about tubing and set out on discovering the exquisite landscape surrounding the small town. There is much more to Vang Vieng than just tubing, and luckily for me, I got to see that. The centre of Vang Vieng is a haven for tourists. The place is rammed with restaurants and bars which have a strange habit of over populating the walls with flat screens and playing continuous episodes of Family Guy or Friends. If you hated either series you were most certainly destined for an evening of frustration.

My stomach situation had not improved and I was still sick. My daily meals consisted of plain rice with salt and sugarless banana shakes to wash it down – it wasn’t so bad after you got used to it. After one evening in the centre I was pretty much “done” with all the tourist traps and decided that come morning, I would seek adventure by renting a motorbike with my old travel companion Thomas.

I woke early and set out on search of a cheap rental. Believe it or not we ended up renting another Chinese motorbike, but this time we tested it thoroughly and the vibration weren’t half as bad. Our plan for the day was to visit some of the lagoons and caves in the surrounding villages. There was a lot of talk about a beautiful blue lagoon which took about thirty minutes to ride to so we decided to head towards there. 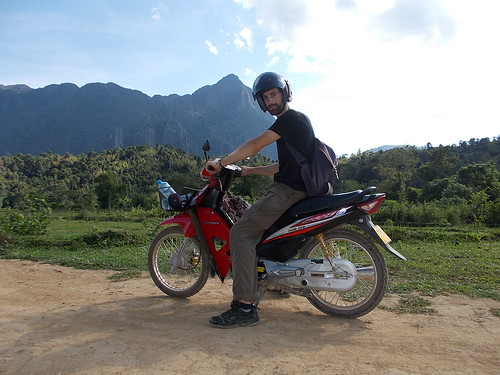 On our journey we decided to stop at a sign which marked a nearby view point. As we made our way enthusiastically towards the ascent a teenage boy stood blocking the road saying we had to pay to go to the viewpoint. “I’m not paying to see a viewpoint, just keep walking.” I said to Thomas. So, we continued to walk and he came running up behind us and stood in front with a look of anger on his face. “You pay,” he said. “Ah forget it, let’s go back Tom. I’m not fighting this guy over a stupid viewpoint,” so we turned back and continued our journey.

These deceiving signs continued to follow. Next up was the “Blue Lagoon”. We paid to get into this one and it turned out to be some dirty stagnant part of the river. When we went back to the entrance the guy who took our money had conveniently disappeared leaving his friend who spoke little English to face the wrath. Tom was fuming and ended up destroying the payment sign which at the time I thought was a bit too far, but looking back, I’m glad he did it now.

Next stop, oh look, another Blue Lagoon sign. We were tempted to turn back at this point but something inside told us to continue. We stopped at the pay point and I told the three guys I wanted to see the lagoon. They let me run over to investigate and there it was, in all its glory. 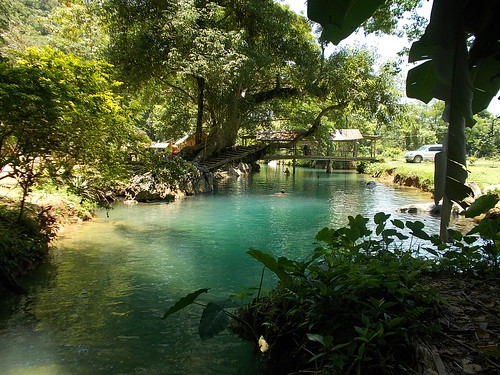 Shoals of fish patrolled the area under the bridge. A rope swing dangled down from a giant tree decorated with wooden steps on it’s trunk and a small platform at its top. A deep, emerald blue rose through the water as the sun shone deep into its body. This section of the river had transformed itself into something magical and quite rightly earned its name amongst the locals as The Blue Lagoon. The tranquil state of the lagoon was soon lost as waves erupted from yet another human bomb, as we all took turns jumping from the tree. Tom was too scared to explore the nearby caves so I left him for an hour and went exploring with the torch on my phone. I came back to find him in a happy state of creativity with his drawing pad, nothing new there!

We spent the rest of the day on the motorbike, following endless dirt tracks through magnificent countryside. The whole area was so stunning I just couldn’t believe my eyes. I kept getting off the bike all the time to take photos which turned out to be amazing! As we headed back into town we stopped for a moment whilst Tom took some photos and I saw an old man break down on his motorbike as he ran out of petrol. As he started pushing his bike up the road I started the engine and rode up beside him. I gave him some of my petrol from my spare bottle so he could get into town. He was so grateful as he rode off with a big smile and it really made my day knowing that I gave something back to the locals – however little it was. 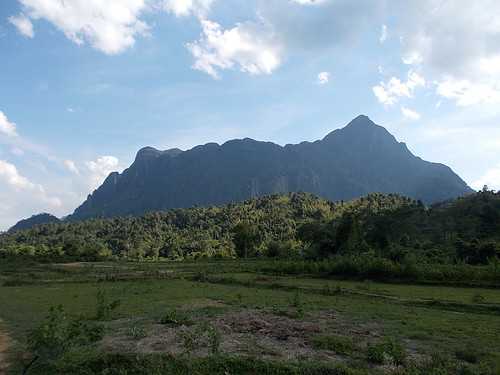 The next evening after another day exploring the beautiful villages, myself and Thomas ended up in some bar full of hippy backpackers. I overheard them talking about a Drum & Bass rave happening that night with free transport to the place and a cheap return back. After initial feelings of disgust at the whole idea I decided to go anyway and see what all the fuss was about. Thomas didn’t want to come so I joined a massive group of people at a local bar for a few games of pool and then we head off to the mystery location crushed into the back of a songthaew like a bunch of chickens. One guy was so drunk he had half of his body hanging out the back whilst someone desperately tried to stop him from falling – it was a crazy ride!

When we got there the music was pumping, but the beer was triple the price! Before I had time to think I was under control of the beat and my body was moving. I don’t think I stopped dancing for like five hours. Awesome music and a little camp fire outside for people to chill out around. When everyone was leaving some old woman turned up with a portable cooker and started frying up that wonderful smell of bacon and eggs. She must have made a fortune that night. Thomas had missed out big time, the egg sandwich was great! 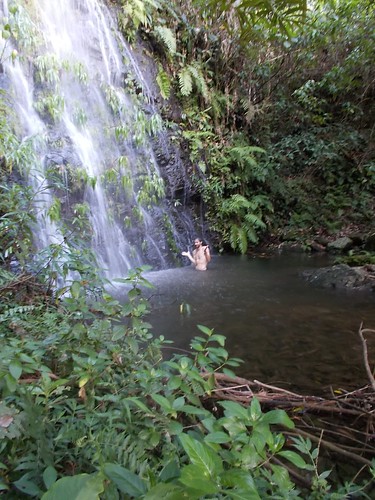 Overall, I had a great time in Vang Vieng. Incredible landscapes, refreshing waterfalls, and, if you want it, an interesting party scene – I am now officially a hypocrite. On the morning of our departure, quite typically we examined our tiny map of Laos for our next destination. Upon noticing a huge lake a few hours South of Vang Vieng, as simple as that, our decision was made. Lake Nam Ngum was our target. I’m sure there we would find pure solitude in an area rarely visited by tourists, what could be better?