Vientiane marks the end of a new beginning 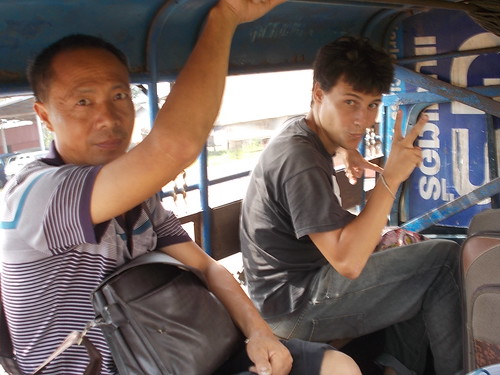 The songthaew ride to Vientiane was eventful to say the least. I was doing some sort of commando hold on the outside ladder giving me great views of the countryside and its surrounding villages. Poor Thomas on the other hand made a grave mistake when he decided to sit in the corner furthest from the back. He ended up being crushed by a mix of drunk locals, sacks of rice, and bags of luggage. Not only that but he had to put up with the smell of fresh pig shit wafting through the air from a cage of pigs that was tied to the back. For me, it was one of my favourite songthaew rides, yet for Thomas, I think quite the contrary. The picture above clearly shows him at the start of the journey.

Dusty streets, shabby buildings, people shouting, and the sound of horns marked our arrival in the Laos capital of Vientiane. It made me want to run away, back to the tranquil state of the countryside I’d grown quite accustomed to over the last two weeks. 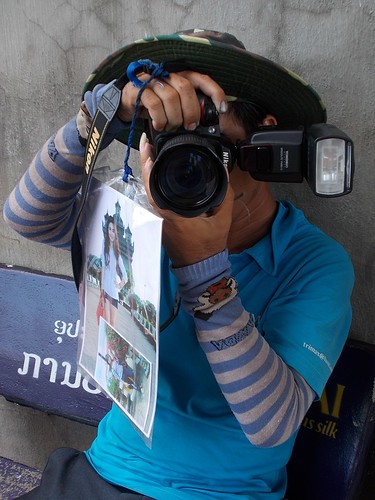 It didn’t take long to find our accommodation in a funky hostel in the centre of town. For the price, it was surprisingly clean and tidy with a smell of fresh paint. We even had a flat screen T.V on the wall! For the rest of the day we hit the streets to see what cool things we could find.

We were walking down the street when some old woman tried to sell us some hammocks for a dollar each. “One dollar?” we asked with suspicion. “You try,” she said with a big smile on her face. We took one of the hammocks and pulled on it from either side. They were really strong and the material was great. We couldn’t believe it, so much in fact we bought six between us. Bargain! 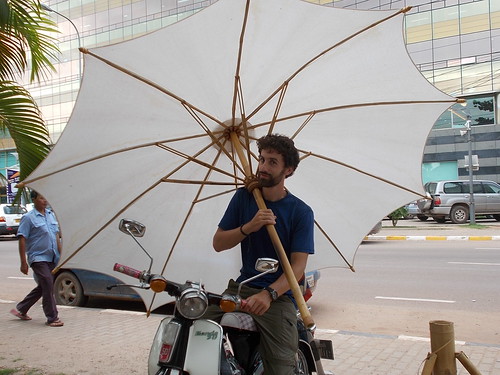 Next up was the shake stall. After first being introduced to the succulence of mangos on my arrival in Laos I was hooked and since then I had found that getting them in shakes was even better! After searching the streets we eventually discovered a stall owned by two young girls. The mango shakes were so good we ordered two. Whilst supping them we got hit by a sand storm that blew over a huge parasol next to us, nearly killing Tom. The picture above shows me taking his near-death experience rather lightly. 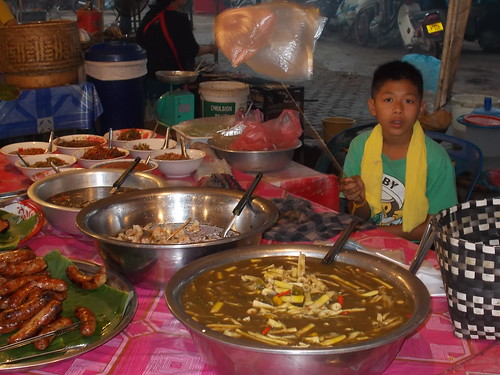 Throughout our whole time in Laos we had struggled to find places were we could eat good Lao cuisine. That was until we ate at Laos Kitchen! (conveniently named). We passed it on the street in the day and decided to go back in the evening to see what it was like. Tom ordered Larb, the national dish of Laos, and I ordered a Tom Som curry. We left the place on a high and kept stopping tourists in the street to tell them to go and eat there, it was that good! On our way back to the hostel we came across some women hula hooping just outside their house. They were having lots of fun and so we asked if we could join in. For some reason, considering I had never been able to do it in the past, I had somehow become an expert and had it spinning round my body at speed with some enthusiastic thrusting of the hips. They all couldn’t stop laughing at the sight of us two playing like children with the hoop. A great end to the night. 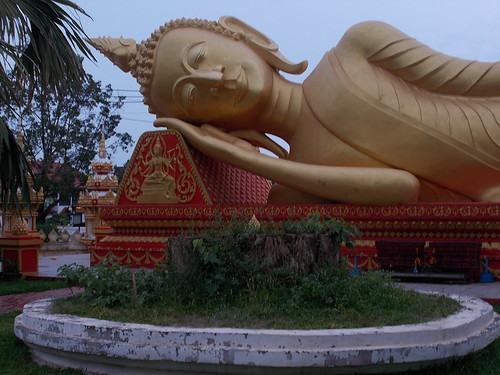 The next morning we were due for our departure back to Thailand. On our walks around the city the previous day we had found a bookshop which did exchanges. For the last few months I had been lugging around heavy books which I had no interest in reading, it was time for a swap. With not long to spare I rushed off to exchange them for two that immediately caught my eye. A book by Paulo Coelho, and a book based on the teachings of the old Buddhist monk, Buddhadasa. My road towards enlightenment took a turn for the better.

Our return to Thailand was by bus which crossed over the Mekong river into Nong Khai. When we arrived on the Thai side I was so glad to be back that I actually cheered with joy. For me, it felt like coming home. Thailand had obviously grown on me far more than I had realised at first.

My two and a half weeks in Laos had been an interesting experience. For me, the thing that stood out most about Northern Laos was the exquisite landscape. Nowhere had I seen such incredible views. The forests stretched as far as the eye could see and the mountains rose and fell so dramatically in places it took my breath away. It remains a country so untouched, so natural, so undiscovered, as I wish many other places could be like on this planet. 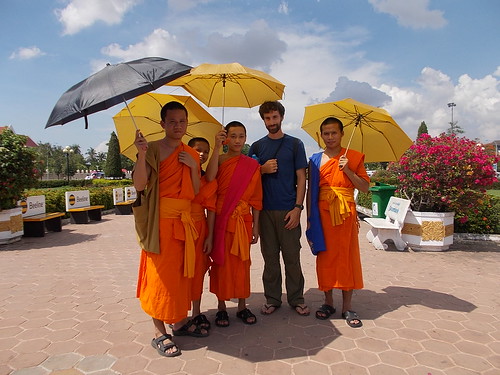 The best thing to do in Laos would be to rent a motorbike and take it for a few days on a road trip. Laos is still in its infancy when it comes to tourism with exception to tourist places like Vang Vieng. The only thing that I found expensive was the cost of travel which they seem to capitalise on in particular. The locals in most places couldn’t speak a word of English and it wasn’t so easy to travel to places off the beaten track.

Would I go back? Definitely! I think next time I would visit the border to China to search out some of those little Chinese villages like the one I had found at Mae Salong in Northern Thailand.

That was it now, Laos was behind me. I had entered Thailand in the East where roads and places were far less travelled. A new journey had begun and it all started in the busy town of Udon Thani.

Catch me soon guys for further updates as I set out to discover more of Thailand’s National Parks with my new camouflage commando hat.