The Stonehenge of Thailand, Chaiyaphum Province 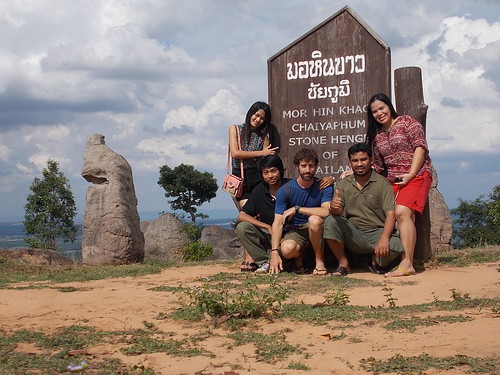 It’s an interesting feeling to arrive in a foreign town with no idea where you’ll rest your head that night. Arriving in Chaiyaphum was no different to arriving in any other typical Thai town off the tourist trail. Everyday life passing by so quickly yet mine appeared to be standing ever so still as I wandered the streets in hope of spotting a building I could identify as accommodation.

Of course I was looking for somewhere cheap to stay. I had become besotted in trying to travel on the lowest budget possible, not because I didn’t like to spend money, but to highlight to others that long term backpacking is affordable and that it’s not just for those with a lot of money.

After a few hours of walking I eventually found what looked to be the only hotel in town, and reasonably priced too. I could have stayed in a guesthouse I found a few streets down but out of all the places I’ve stayed in the world, I couldn’t bring myself to stay in such filth.

Staying in a town never appealed to me much. The only thing that interested me was food and meditation which meant spending most of the day stalking places to eat where I could practice ordering in Thai, and finding the nearest temple where I could relax and find some inner-peace. It’s comforting to know that you can just walk into a temple, sit on the floor and close your eyes without having to declare your religious belief. 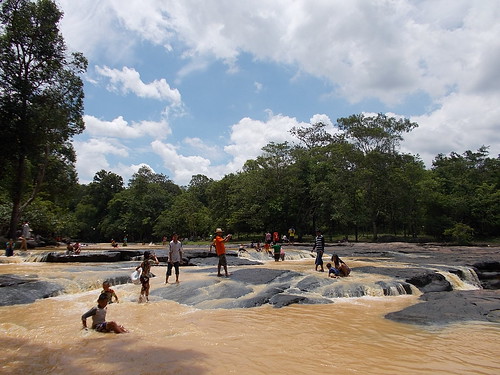 After a few enquiries to local residents I managed to find the departure point for the local songthaew which passed by one of the province’s National Parks. In my efforts to lose the “farang” term which Thai people quickly attached to tourists, I had donned my commando hat and pinned the face covering up so only my eyes were visible. I also kind of hoped it would stop locals trying to rip me off, but I guess I’ll never know to what effect it had apart from a few curious stares.

My visit to the Tat Ton National Park started with me blagging my way out of the foreigner charge in which they quadruple the entrance fee. I then strolled down to the waterfalls of which the park was recognised for. There were a lot of Thai families enjoying the day by the riverside feasting on picnics and ice creams.

As soon as I sat down I was invited over by one of the families and offered a mango. Whilst in Laos I was shown a cool way of peeling one by Thomas where by you cut it in half and slice it both vertically and horizontally from the inside without piercing the skin before turning it inside out to eat it off the skin. When I preceded to hone my skills on the mango, the family watched in amazement as if they were seeing something profound, although when Tom showed me I remember being just the same. 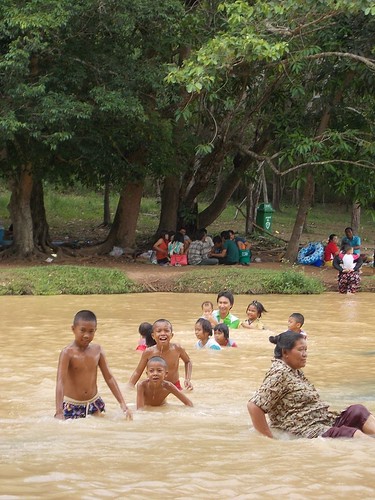 After stripping down to my underpants I spent a few hours swimming in the river and was soon involved in some shark inspired game where I would disappear under the water and then pop up suddenly to the amusement of a group of kids who kept provoking me into a water fight.

After hours of fun I decided to try and hitch a ride to Phu Laen Kha National Park a few miles up hill. Before I’d even had a chance to stick my thumb out, a car full of young Thai people stopped and asked me where I was going. Much to my delight, it turned out to be the same way.

So there I was, once again sitting in a car full of strangers I didn’t know. A few of them could speak basic English and could even understand my wit which was pretty impressive. The contrast to the other National Park was striking. Labelled “The Stone Henge of Thailand” it was an interesting place to walk around with lots of rock formations scattered around the park. 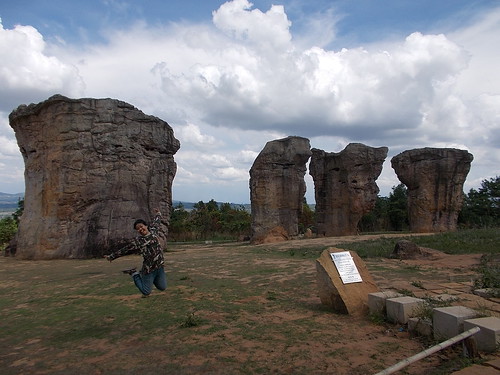 With an ice cream in one hand and my camera in the other I was quite content with sitting on top of one of the huge boulders and snapping away at my surroundings. I was thankful when they offered me a ride back to my hotel as they were going back in the same direction. It had been an epic day of adventure.

When I opened my map up on the bed that evening I noticed that one of Thailand’s greatest National Parks (Khao Yai) was situated not so far from where I was staying. The closest town I could get to where I was likely to rent a motorbike was Saraburi so with that in mind I packed my bag and set off the following morning with thoughts of wild elephants and monkeys fresh in my mind.

Catch me next time guys as I share my interesting experiences whilst discovering the beautiful nature of Khao Yai National Park.