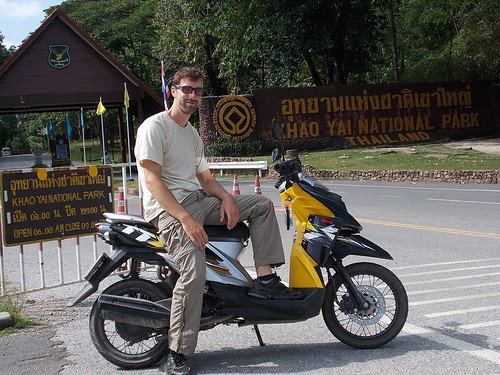 Well, I made it. See that motorbike I’m sitting on? I had to put on my best charm to get that! I was gutted when I arrived in Saruburi and couldn’t find anywhere to rent a motorbike, but, typical me – being not the one to give up – took a train to Ayutthaya and spent the whole afternoon trying to convince rental companies to let me borrow one for a few days. I eventually got lucky and came across two young (they’ll like me for that one) Thai women who, after much persuasion, let me rent one of their newest motorbikes. A day later, after plenty of sleep and a long ride up a dusty highway, I had arrived at the place I’d wanted to visit for some time. Thailand’s first and oldest National Park, Khao Yai. 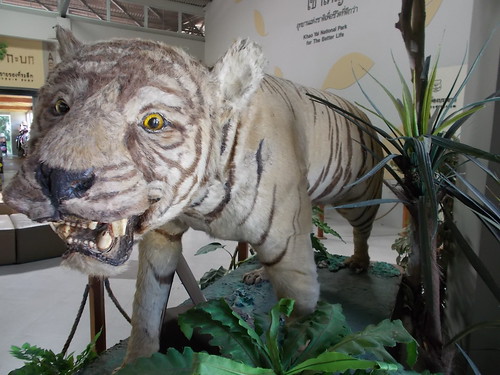 Rahwww! Scary huh?! Well, there was a time when tigers (and other exotic mammals) would have roamed freely in Khao Yai before it’d become a National Park. Although their last sighting had been decades ago, you just never truly know what’s out there. I had better keep my wits about me. 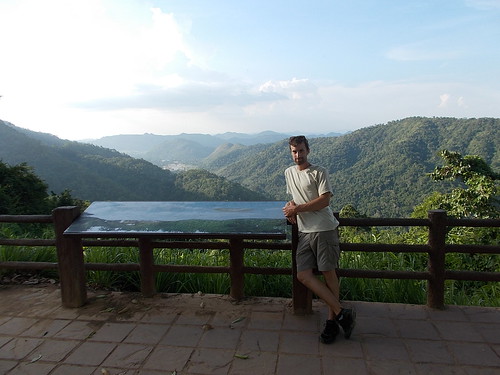 I can’t believe how big this park is! Looking out over the tips of such vast forest really puts that into perspective. If this is the first point of interest in the park I can’t wait to see what’s further up the road! 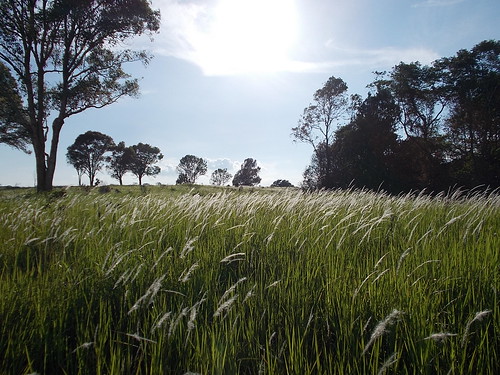 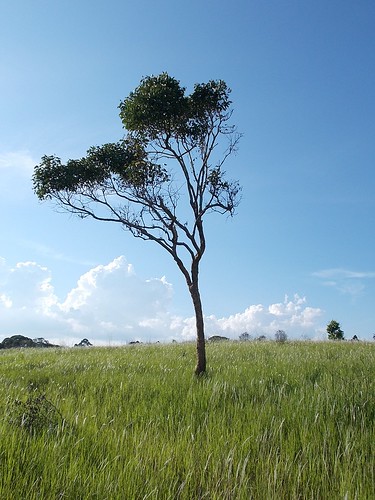 Beautiful isn’t it! Walking to a salt lick (aptly named) where elephants go to lick salt was an experience in itself. I was surrounded by such characterful landscape. I loved the way the grass swayed in the wind and how a tree took solitude away from the crowd. The sky was blue and the sun was shining. It was one of those perfect moments in life where everything works together to create something magical. I climbed the watchtower and waited… and waited… and waited… until finally I decided that the elephants didn’t feel like licking salt that day. 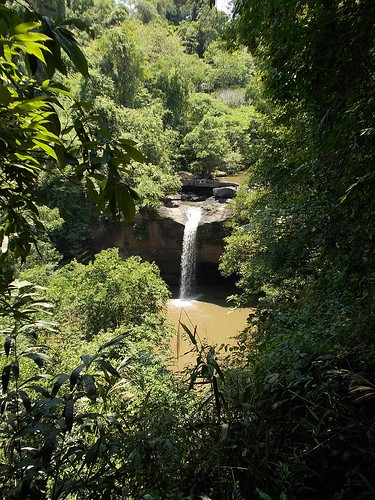 Have you ever seen the film The Beach with Leonardo Di Caprio? The moment when he escapes from the marijuana farm and jumps off the waterfall? Well that is one of my favourite films and that very scene was filmed right here in the park. Yon can probably guess that I didn’t think twice about jumping in for a swim, even if it did say NO SWIMMING. Straight down to my boxer shorts. Fortunately I had the whole place to myself 🙂 It was a lot smaller than in the film so they definitely used special effects! I was conned 🙁 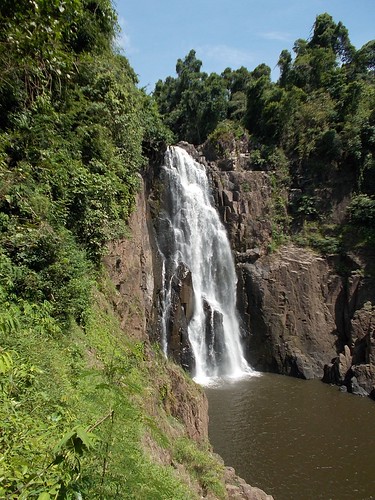 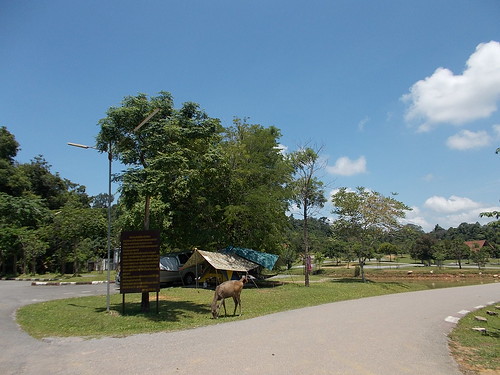 There were other waterfalls too and a lovely camping location with lots of deer walking about. I regretted not bringing my tent as I would have definitely stayed the night. 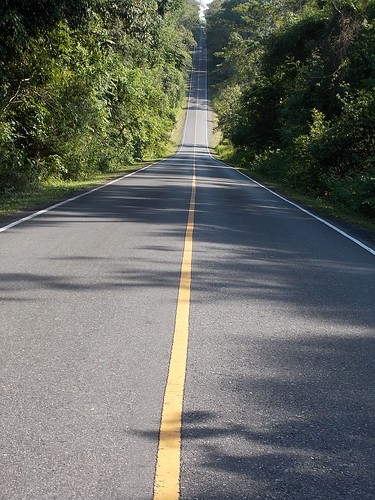 This was one of the coolest roads to go down on a motorbike. See that bit of sky at the top of the picture? That should give you some perspective of how much bow the road had in it. Further on from that I across some surprising sights. 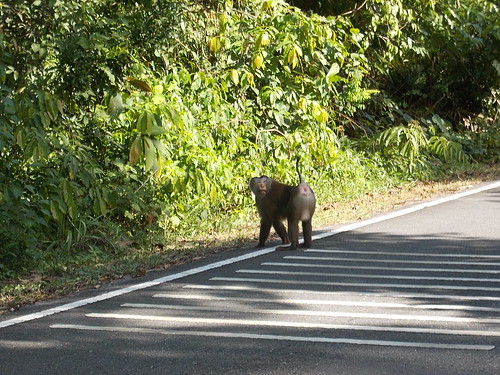 First of all I had this little monkey showing his bum to me, and then a wild elephant crossing the road right in front of me! I managed to get close enough on the motorbike to shoot a pretty amazing video. One hand on the camera and one hand on the accelerator for safety – like I know what that is these days! 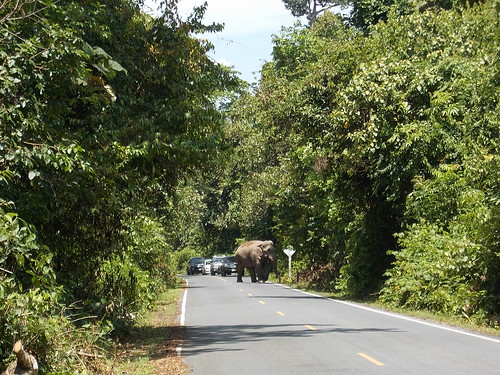 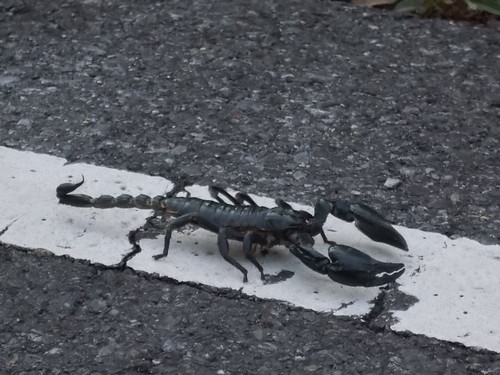 Next up was a black scorpion skittering up the road with its tail in the air. I didn’t fancy getting close to that but obviously close enough to get a decent photo of course!

What an interesting place Khao Yai had turned out to be, definitely one of my favourite National Parks in Thailand. 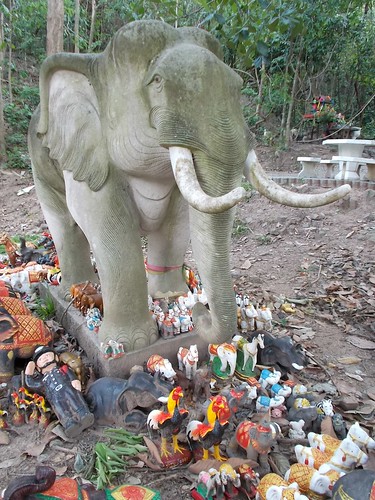 On leaving the park as customary to most Thais I paid my respects to the Buddha at his little shrine next to the park entrance. After dropping the bike off at Ayutthaya I’m going back to where I started nearly six months ago to pick up my beautiful girlfriend.

That’s when the second part of my adventure will truly begin.

See you in Bangkok!