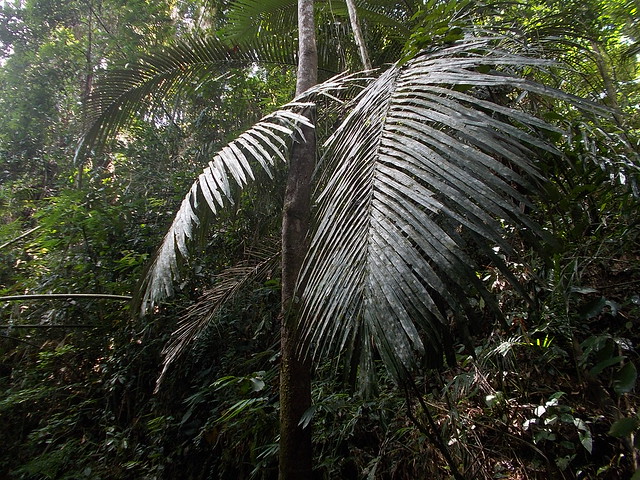 The forest drew close on either side as the bus wound its way down the narrow road towards our destination. The rain trickled down the window as the trees flashed by in a blur of green. It all looked so unexplored I thought, as I gazed out at the jagged cliffs that rose above the trees, longing for my next adventure to begin. “Jonathan, where’s my phone?” I heard, suddenly snapping back to reality. Louise was turning the bus upside down and all the passengers were staring.

Earlier, we had switched seats to sit at the back of the bus as there was a bit more leg room and as I suffer from Restless Leg Syndrome (yes, that really exists!) I found it a bit more comfortable. Unbeknown to us at the time I had left Lou’s phone in the netting on the back of the chair in front of us. We only realised this after we had crawled around the floor in a frantic search for five minutes looking under all the chairs.

Our previous seats were now occupied by two young school boys who looked guilty (as anyone who took your phone would) and the netting revealed nothing but a discarded sweet wrapper. I pointed to the netting and made a phone gesture with my hand to my ear, holding my palm out in hope one of them would turn out his pocket and hand it over. We got nothing in return but a dumbfounded look of innocence. Our stop soon approached and it was very hard to leave the bus knowing that Lou’s phone was on there and there was nothing we could do about it. To top it all off in our rush to exit I had left Lou’s folder on the back seat with her notebook and a few other personal items inside. It wasn’t a very good start to our day but I tried to remain positive for Lou’s sake. 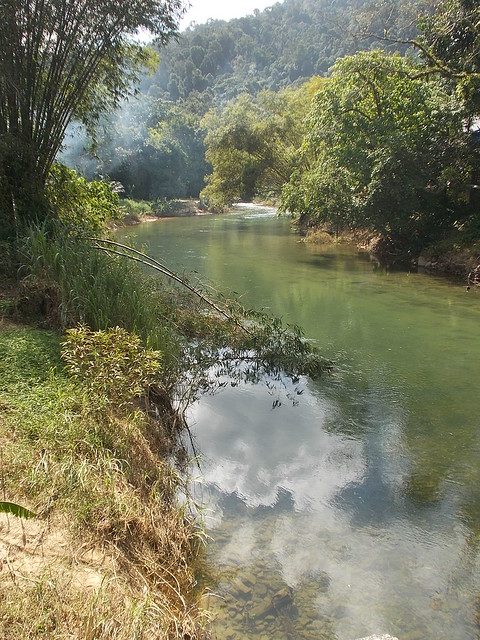 The village was small with a collection of guest houses and restaurants lining a narrow dirt road that crossed a stone bridge over a river to lead straight up to the entrance of Khao Sok National Park. It was a nice place in the middle of no-where where you could come and enjoy yourself for a few days and do a bit of exploring in the surrounding forest.

The first group of people we saw were some young European girls who were lounging around on what looked like some very comfortable furniture. We noticed one of the girls doing her makeup by which Lou comically muttered “get a grip love, you’re in the jungle”. I burst out laughing as it was perfectly delivered and it brought a touch of humour to what had been quite an unfortunate morning. 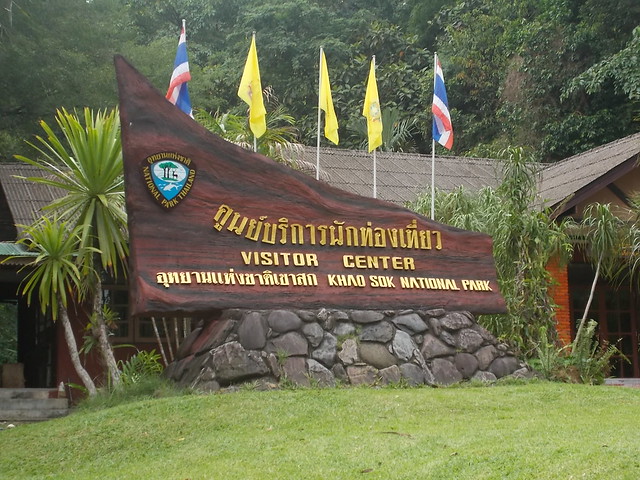 All the guest houses on the road were full so we continued walking a bit out of the village until we found a few closer to the forest. The first place we checked out was a highly risen wooden hut where you climbed a ladder to get in. It looked great from the outside but unfortunately on entering we could smell mould so we quickly moved on. The next place was another wooden hut, not so high, but in a very pretty area with a mountain backdrop. This place didn’t smell of mould which ticked all the boxes and it was even rocking some traditional bamboo cane flooring. We were instantly sold and we moved into our new home for the next few days. 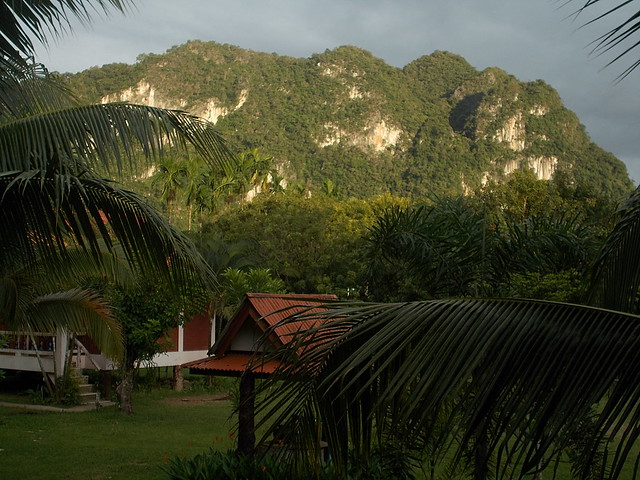 That evening we headed into the village to get some food with our handy pocket torch leading the way through the pitch-black night. We walked up and down the road to survey what each restaurant had to offer (there were only a few but I like to have a look around first) until we found a cute little restaurant nestled in some greenery by the river. As we walked in we found a table in the corner which looked ideal and as Lou made her way towards the table I stopped beside two girls who were talking and said “erm… we usually sit here”. They both looked at me as if to say “so what?” so I stood for a few moments longer to create an awkward moment then went and sat with Lou. I was only joking of course, but I delivered it with such a dry sense of humour I think it was only me that found it amusing which is usually the case. 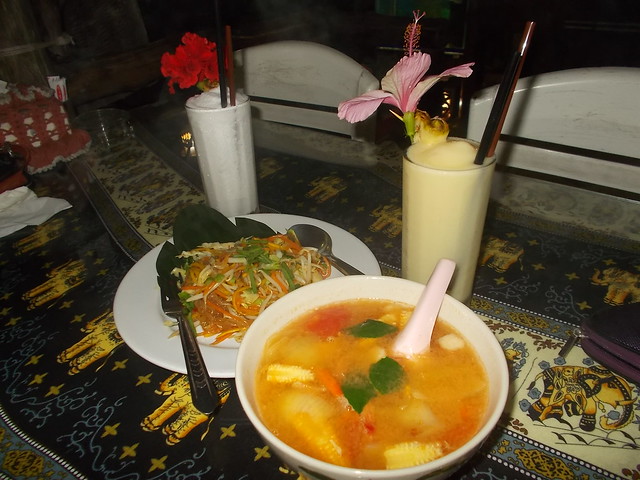 On our way back to the hut we heard a rustle in the bushes followed by a low growl. Suddenly two white eyes materialised and we realised it was a dog, a big dog, a very big dog. I was scared but I couldn’t let it show to Lou so I said “stay calm, just keep walking slowly and whatever you do, don’t run”. Suddenly the dog pounced and grabbed Lou by the throat as she dropped to the floor… okay that bit never happened but… I did make an aggressive barking noise and in return it made a deep howl that echoed through the village. Seconds later all the stray dogs where howling and we could hear more approaching from further up the road. As we backed away we turned and quickened our pace virtually running ran back to the hut and nearly tripping over a dead snake in the middle of the road. That was enough for one night and we were back to the “safety” of our house with the creepy spiders, the army of ants, and the blood thirsty mosquitos. 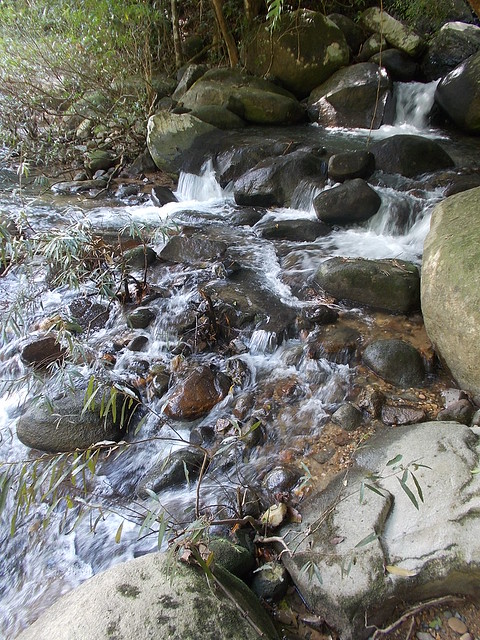 The next morning after an unsurprising breakfast of rice we headed into Khao Sok National Park. The weather was looking a bit grim and it was forecast for heavy rain. Upon arrival, the ranger told us that we could only hike on certain trails as some of the routes were prone to flooding. Well, he didn’t say that exactly but I got the gist. We set off quickly so we could get some good hiking done before the rain came. We were lucky because the National Park was empty so we had the trails all to ourselves, including some lovely stretches of turquoise green river where I swam and bathed (after very hard hiking of course). The insects in the forest where like nothing I had seen before and I took a cool picture of one which showed off all its colours and interesting characteristics. 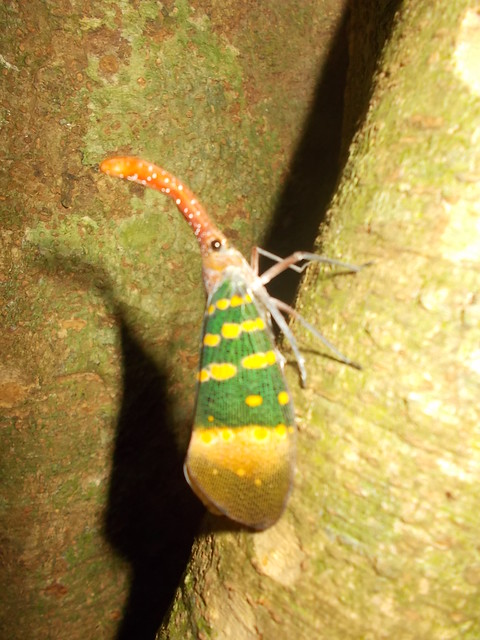 As we were walking I spotted something strange “Lou? What’s that on the bottom of your pants?” I asked slightly concerned. “What? Where?” she asked examining her pants. “There!” I said pointing to the red stains that were growing larger as we spoke. She lifted her pants up expecting to see a small cut but lo and behold this culprit was the last thing we expected. A leech! Not just one but a few of them, sucking all the blood out of her ankle. “Ahhhhhhhhhhhhhhhhh!” she screamed. “Stay still I’ll get them” I said pulling them off frantically with my fingers. Luckily, they were only small and didn’t have much of a grip on the skin. A short while later we saw a small group of hikers. They all had material strapped around their pants at the bottom. It was all making sense now so we stayed clear of the long grass after that. 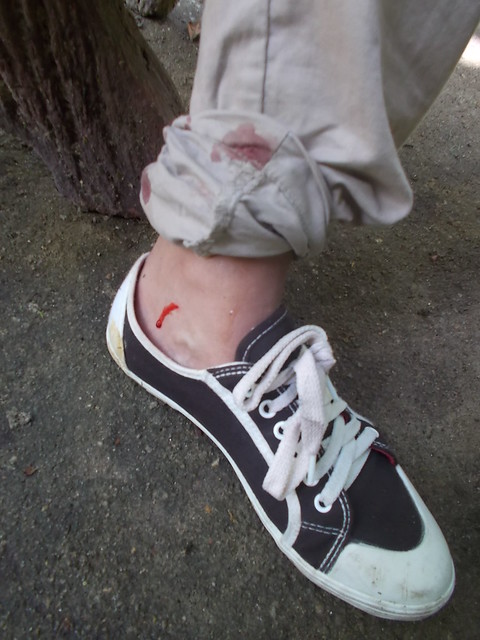 The rain soon arrived and as expected the river was starting to rise and the trail was becoming increasingly slippy. As I quickened my pace I heard a thud behind me and Lou had fallen down a small hill and hurt her arm. She was quite upset and she had a massive lump on her arm to show it. With tears in her eyes I felt awful for moving too quick and making her rush to keep up.

Half way back we heard a loud rustle in the trees above. “Did you hear that?” I said to Lou. Next minute the trees erupted with life and long tailed monkeys flew across the sky leaping from tree to tree, swinging wildly. They were moving quickly, probably late for lunch, so full of life and energy. No sooner had they arrived they were gone leaving us with nothing more than a great first-hand experience of nature. 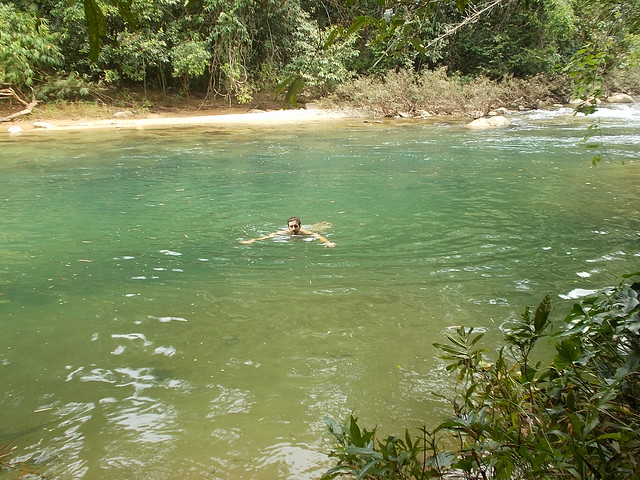 When we got back to the village all the locals where taking shelter from the rain. There were a few men sitting outside one of their shops. One of them had a motorbike for rent and I was semi-interested. He offered it to me for a day for 350 baht and I offered him 150 baht. He came down to 300 but I thought it was a bit too much as I had never paid over 200 baht so I declined and left him dwindling in the rain. 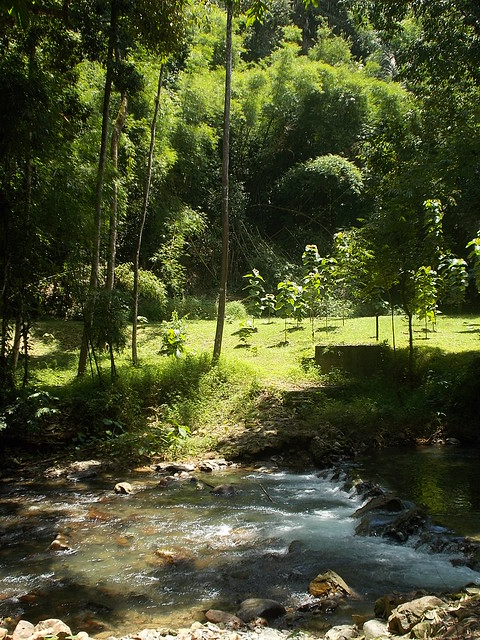 The village was a great little place, tucked away in nature and even though it was raining quite hard every day we still managed to explore the area and have a good time.

As we prepared to leave I decided to lighten the load and leave behind my beloved four-man tent, well I say “leave behind” but I sold it to one of the guys working at the guest house for 50 baht – the cost of the taxi to the bus station. I then haggled with an old woman at the bus station to take us in a private minibus to Krabi. When we couldn’t settle on a price we eventually took two public buses and decided to see a bit more of the road. 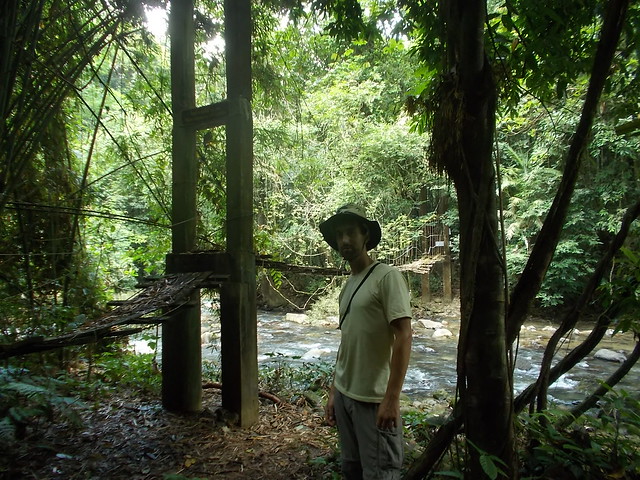 Our next destination was Krabi – a popular place in the South of Thailand, well known for its river cruises and a little magical island just off the coast with a beautiful beach.

I really wish it would stop raining!